The Black Blood of Christ Lyrics 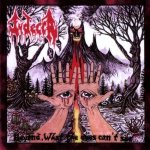 Album rating :  90 / 100
Votes :  1
9. The Black Blood of Christ (7:08)
Track rating :  75 / 100       Votes :  1       [ Rating detail ]
And one angel fell from the heaven, from the heavens unto this Earth.
And unto him was given the key, the key to the pits of the abyss.
His soul consumed by evil, he lies dying on the cross.
Hatred grows deep from within, he tastes the feast of blood.
And he opened the bottomless pit, and there arose smoke out of the pit.
As the smoke of the great furnace, and the sun and the air were darkened.
His own god given powers, used now to extinguish life.
The savior child, holy, now does the work of Satan.
And they had a king over them, which is the angel from the bottomless pit.
Whose name is Apollyon, and in those days shall men seek death...Murderous with a thirst for pain, accomplice with the beast.
Cross this world in search of power, to destroy all Christianity. To destroy all Christianity...