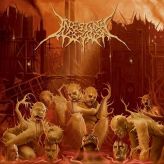 Contaminated Land, noise of clandestine factories
Where do experiments of zombies there are rows of corpses
That get thrown away hoping to make sunny

It is contaminated, infected next to turning in zombi and
The vultures go it was he who was grasping they attack it and do its work