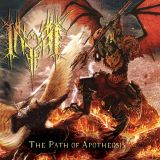 Album rating :  79.2 / 100
Votes :  6
5. The Ophidian Form (5:48)
Track rating :  90 / 100       Votes :  1       [ Rating detail ]
Banished from Elysium, a deity has been dethroned
Cast into the unknown
Scouring the wasteland, forced to fend for his own
Stripped from his sovereignty
Now an outcast, an enemy in exile for eternity
As he leads the pariahs further into the abyss of heresy
Vile acts of betrayal brands a stigma on his soul
To wallow in filth, never
His pride to great for sickness and woe
His enemy's extinction is undeniable
In solitude his fury grows with a vengeance
His constriction on hate seeps from his veins
Like venom embraced by coils of contempt
The enraged mastermind will now stop at nothing
To breach the gates of Elysium

Deception is his contrivance
He takes on the ophidian form
To manipulate and regulate his children
From the viper born
His army of anathema, bound by his will
His ethos begets them to kill