Behold the Kingdom of the Wretched Undying Lyrics 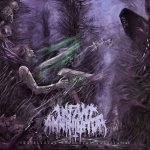 The First: the orchestrator of the fall of mankind.
Ha shall remain nameless, for his sins provide his glory.
He, who dwells in shadow
It came to him in a vision.
A blinding light – pure comprehension.
His principle purpose, his calling to eradication: Purge the world of all hope.

A single voice from the shadow called to him...
A hollow voice; swallowing, engulfing.
Devoured by darkness, the blackest speech seeped into his soul.
The blood of the serpent leaves him whole.

The devouring darkness; the blackest speech stains his soul.
The blood of the serpent; a pledging of power leaves him whole.

Purge the world of all hope.

A vile proposal spluttered from the demon's forked tongue.
The voice resonated deep within the mortal's soul
And at that moment the sky rained fire and the beings became one;
Unholy Alliance.
The legacy unfolds.

A single voice from the shadow called to him...
A hollow voice; swallowing, engulfing.
Devoured by darkness, the blackest speech seeped into his soul, proclaiming.
"I am God Almighty."
"Walk before me faithfully and be forever blameless."
"Thereupon lies our bond; an ancient seal."
"For time to come we will give rise to legions of disciples."
"My bond in your flesh is to be an everlasting covenant."

"Circumcise every child born unto us, for they are our lifesblood."
"Defile the spawn of every heretic, for they are blasphemy incarnate."
"Castrate, neuter and mutilate in my name to safeguard the purity of our breed."
"Harvest the pelt of every innocent and have them pave the way to our future."

And so it was.
The first embodiment of The Child Rape Syndicate:
The Covenant of Circumcision.
An abhorrent cult, ruthless in belief and merciless by nature.
Answering to nothing but their own faith,
None but the utterly devout were free from The Lord's infinite wrath.

Depths of decomposing bairn flourish by the second, tearing through the taint of the earth.

"Praise our God Almighty! Walk before him faithfully and be forever blameless!"
"Thereupon lies our bond; an ancient seal."
"Our time has come and we will rise as a legion of disciples."
"His bond in our flesh is to be an everlasting covenant."

The trumpets bellow upon the pulpit beneath this monolith as the ministry prays to the forbidding firmament.
Fire burns the eyes of the tormented immature souls amidst the tomb of omnipotent sanctity.

Plagues of paedophilic disciples scour the land,
Stalking through the hecatomb sylvan palace, hunting beneath.
Footsteps fall faintly into earshot amidst the heavy breathing of the infernal savages.
Their imperium illuminates through the decaying trenches;
The last light before the undoing of the world.

Mount the flaccid fertile shaft.
Servants of the chapel swallowing the lamb,
Raped to birth the next spawn of the sacrament.
Cherishing the child.
Preaching the ritual.
Ripe, freshly blooming virgin moments into puberty devastated by these extremities;
Mistress of nefarious ceremonies grasping the thighs of the shepherd.

"Eternally human, an unworthy prophet: my father, whom pillaged and cleansed on a voyage of impurity."

"Eternally human, an unworthy prophet: my father, whom pillaged and cleansed on a voyage of impurity; a barbaric pastor procreating a perverted foul egg..."

"And I am the son who was beaten and raped into divinity."

[III. He, Who Holds Dominion]

He, who holds dominion is the keeper of sacred tradition,
The bearer of the cross, a divine ruler with a tainted vision.

The holy birthlight: to stoke the embers of heir father's ashes;
Preserve the monarchy and strike fear into the masses.
Predestined by God is the ascension of each new messiah born of a slain virgin the dirt; Unholy Gravebirth.

Raises with a single intention: to annihilate in The Lord's name.
The ancient ways are professed in the final teachings of a mortal becoming of age.

He sits on his throne of infant debris, spouting polluted words to a world on its knees.
Commanding myriads of believers, impregnating his infant breeders.

"This is the way of God. A bulling of cattle and a blackening of innocence."

So, as our story draws to an end and hope began to fade from the hearts of the many, existence became blight and death became vital.
There was nothing left on this desolate plane except the twisted desires of the cult.
Yet what they had done was merely the falling of small stones that starts an avalanche:
Through countless millennia the cycle of the anointed endured.
With each successor they drew closer to their wicked intent:
To grant vitality to the one who would bring about the end of days.
The Wretched; The Undying; The Elysian Grandeval Galèriarch.
Now a new dawn emerges, the prophecy converges.
The endless debauchery and purges lead them to the perfect virgin wherein the seed is lain;
Both putrescent and profane.

"Arise, great demon majesty!
This is the time. The ceremony begins.
The choir chants the symphony of the Great Awakening."

"Amen oh father, oh grievous overlord! We come forth bearing the celestial chalice of puerile pabulum: a feeble specimen pinned to the altar – the great slab of sacrificial bondage, ready to be imbued on your will."

"In your name I pray. Heed my plea, come forth! Rise, monolithic overlord!"

"The ways of our ancestors endure."

"Oh, how my father has taught me, like his father before him."

"Following the sadistic scripture of perverted power passed down through generations of paedophilic kingpins."

"I am the embodiment of holy rapists; the manifestation of molestation."

"Embracing the divinity granted to me; enchanted by the unspoilt, glistening genitals."

"Oh, how my father has taught me."

"Child of filth, you have disappointed me."
"You are not worthy."
"The power you seek is beneath the virtue of our legacy."
"Abide of be abandoned."