The First Murdered Lies Within the Primordial Grave Lyrics 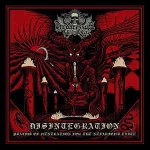 Album rating :  –
Votes :  0
5. The First Murdered Lies Within the Primordial Grave (6:05)
Necrotic miasma unfurls, swirling out of the barren earth
That sweet aroma that intoxicates our eternal father's initiates
Death, death, O' lord of death
release us from these shackles of bone and flesh
Frater cida, pneuma supreme, great killer of the blind and deaf hylic dreamer

For he by his nature is unique
First adversary of the earth, first who snatches life at will
First quencher of the thirst of the earth
The first of the bloodline of fire and of death and dissent

From above and below the place of the skull
of lead and copper and of Nekh O' Sheth
of seven, thirteen and one hundred and eighty two

The first murdered lies within the primordial grave

Grow the poison
Feed the flames
Strangle the psyche of earthly mundanes
Bury the body
Ignite the soul
Snuff out the blind, three-dimensional goal
End the worthless
Punish the weak
A conquest so crushing dead prophets shall speak
Heap the riches
Harvest the goal
Inherit the earth, transformation unfolds

For we walk the Earth, to cut the ties, and end the cycle of time

Disintegration: Psalms of Veneration for the Nefarious Elite - Lyrics