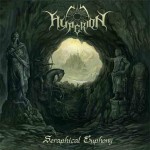 Raised on desolate steppes, with horseback aligned
Skillfully mastering dexterity along with his might
Though his ambition to rule brought feuds and dismay
Bledda would not be the last to behold his reign

(Now) merging the scoundrels and villains in arms, he marches to war
Demolishing villages, pillaging every home
Gallic towns were slaughtered, removed from the face of the earth
(And) the Visigoths grew in detest to the hunnic abuse

Flavius Aethius, quickly emerged to seek favour in coat of arms
For the Visigoths shared the Romans detest to their foe
By the gates of Orléans, the bloodiest of carnage was fought
And the very first emblem of frailty was yet to unfold

Compelled to withdraw with uttermost haste, seeking refuge beyond the gates
Where strategical virtues would grant a superior blow
Alas, the strife was lost to the Magister Militums bliss
But they would not evade The Scource of God!

“Worthless, frail offal!”
His spiteful intentions ablaze
With the essence brought forth by the
Foulest form of stars
Now vengeance was imminent, as he aspires to devastate and burn

“May all ye tremble and lay faith in thy plea
For now we march upon Rome herself!”

Tainted, abhorred, disgraced and forlorn
Beseeching and pleading to spare them from woe
An armistice was sealed for their relentlessness subdued
Though forthwith he’d conceive plans most vile and crude

Yet a hero’s death was not in store, nor bloodshed, nor defeat.
For he would meet his bane through the chalice of deceit
A thousand slaves erect the cage where he would find serenity
Remains within the rivers are now washing away
To this day