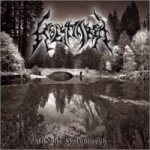 Resistance. What's getting under the burst into eruption of worth of mine
A marsh of my soul what is changing to pollution as vomitus
The matter of blazed about
Such about god and eternity worth and due.
Now it's all just bustling insistence without any contents.