Knee Deep in the Dead Lyrics 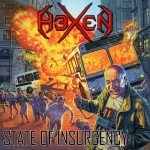 Album rating :  80 / 100
Votes :  2
4. Knee Deep in the Dead (4:01)
Transferred from earth into outer space,
A base on mars; the most desolate place,
Home to secret projects and nuclear waste,
Something's not right, there's this evil I taste.

In the ninth corridor I'd pass on my way,
A gateway stood that the scientists made,
An "inter-dimensional space traveling" door,
That on its test run opened up to hell's core.

Spewing out all over the radar scan,
An unknown life-form; one never seen by man,
Invading the base killing all who is in sight,
Before I knew it I was the last one alive.

Equipped all my weapons base is on high alert,
No one picking up distress signals I'm sending to earth,
Locked up all sector seven-eight floors,
I'll trap them inside the ninth corridor.

Sector seven-eight's down, destroying all the floors,
Extermination is what they're here for,
I shut off the lights and use infra-red,
Hunting the hunters I'm knee-deep in the dead.

From the shores of hell to our human realm,
The devil sent his minions to overwhelm,
Every one I kill ten emerge from the gate,
They've arrived on earth and it's all too late.