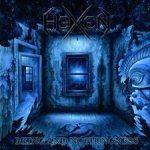 Album rating :  81.7 / 100
Votes :  3
7. Indefinite Archetype (6:23)
Blind and indignant, you won’t see that your own statements are contradicting,
Your very existence, take a hint, what is perceived is subjective reality,
The path that is chose, be it yours, lay wasted away by denials and chores,
Determined to prove that confusion is vice, in an endless abyss of limitless sacrifice,
Numbers don’t lie and neither do I, thus spoke the ancients in patterns and dye,
Collective unconscious much less a dream, to understand life is to attain ability,
What once was certain now is lost to the hands of the victims of the albatross,
Insight and knowledge easily skewed became the misconception that guides your view towards…
life.

Intricate balance, many ways in which light shall pierce the ubiquitous haze,
Cause and effect, a mere paradigm, transcends beyond chance yet distorters deny,
Manifestation for humanity is more than attesting half-truths with daunting beliefs,
When immediate action proves sane men naïve, an existential source is vastly decreed,
Falsified heroes paving lines by which lives are altered and chosen ones thrive,
If as above so below, now we must conquer our-selves to forgo,
The pendulum prophecies lay beneath the tides falling to rise, observe and be seen,
Among twilight’s idols, indivisibly, wisdom and instinct entwine and is born unto thee.

Cast into a darkened plane by which shadows may escape the past,
Consolation for dire souls flung towards the unnerving black,
If the ego is the ghost that has arisen from the grave of the self,
Then expect it to act in ghoulish ways!

Principle knowledge, once possessed, likened to comfort, lays one to rest,
Indiscrete memory, condemned to forget, that which preceded our lives to beget,
Ages of solace, no one sees, the opportune sequences made to appease,
Correspondence, calculative success, the incontestable machinations of progress.