Fall of the Bridge Lyrics 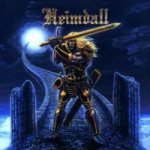 In the midst of time, the power of the evil force created troops of darkness
Naglfar, built by the nails of the dead attacked

The lord of the wind turned black all the world
And called up the giants of the north
Muspell's sons shattered the sacred and burning Bifræst
...HEIMDALL was a storm of steel

From the depths of the abyss, a stream of fire arose
It ran over all the creatures in the land of ice called Vigridr