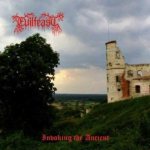 Album rating :  –
Votes :  0
2. The Nine Ghosts (Osculum Infame cover)
In the malignant spirit of Sauron the damned
Where born the fabulous rings of power

Their work of domination started with ancient kings, warriors and wizards
Perverted by glory and power, became the slave of the lord of the ring.

Spectral were their appearances
As though mere shadows in darkness...

Nazgël, damned souls of the tenebrous lord,
The night walks with them
Death howls from their mouths

Knights of chaos, riding obscure dragons
Horrifying apparitions led by the madness
Of the Prince of barad-Dër.

With a blind devotion, the army of Mordor gathered about
The sinister towers of Minas Morgul
A cursed fortress for the black ghosts,
Where forbidden sorcery is practiced.

The beginning of war, marching
To an epic battle against golden armour,
The chronicle of the infinite quest...