The Nemesis of Frej Lyrics 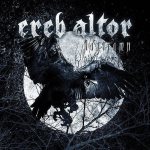 Strong is the hand of the giant from the land of the flames
Deadly is the sword, deadliest of all blades.
Shining brighter than the sun when it cuts throught the air
The ride of the giant followed by all his sons

Towards the end he ride, he is wielding the blade of blades
He has waited for so long

From the beginning of days, the birth of Ymer, until the day of days

The King of fire stands strong in the field of battle
Many Gods and men fall by his hand
Until Frej steals his vision, piercing his eye
The son of Njord must pay the price
Feel the sword of flames.
The nemesis of Frej
Feel the pain
Doom is near