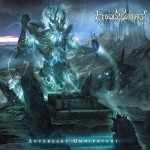 Divine decree has reached and pulled me inside
Found myself in an astral state as if no longer a slave to time
Years had passed by without a sing moment lost
Immersed in the mysteries of Yaldabaoth
Pulled from my slumber in the nocturnal hours
Visions seek to sway my path to an illuminating presence
The masters - calling me by my true name, Im'maud'hi!

With the tree completed, it's monolith self inscribed

In the wilderness seven years had come and gone
Im'maud'hi our hero determined to bring about the light of dawn
To teach his mysteries to only trusted kin
Destiny! To reverse Ik'thran'ithul's sins
Buried beneath the obelisks encased in stone
Enchanted gears perpetuating frequencies of confusion
The destruction of these monuments is the key to freeing the minds
Once this hideous curse is broken I will rise

Together, this night we resists the tyrants
And birth the new revolution
We destroy the first monument of control
And the rest are soon to follow

And brought with them Da'at
They rose to meet the path of prophecy manifest in flesh
And with coming of dawn, great works they would spawn
"I beseech thee o Pistis guide my hand"

Undoing the workings of tyrants of greed
And they revel in fear as the minds are unleashed
For we shall not stop at once
But dismantle all shrines of oppression
Stone by stone we deface, autocracy erased
And establish our name by subjugation
Surrounded now, by guardians of the king
Brows furrowed and weapons drawn
And with our spells, we cast them into death

For we are the few who dare to rise
Placing the weight the world, solemnly on our backs
Forging a path to mysteries of the ancient one
We await the coming days, with quests whispered from sacred daemons and demigods
Our future is set