Wrong One to Fuck With Lyrics 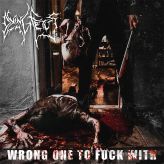 Wanting to astonish so everyone can see
Attack unworthy foes, no not like me
Petrified pride, the sad fool's terror
Blind-sided and broken, soak in the ignorant failure

Living to intimidate, tormenting the ones you can
Rolling the dice is your fate, unlucky or doomed or dumb
Never wanted to gamble, thought the strength was assured
Then there's an immovable object, your power and unstoppable force

Thinking the outcome can be in doubt
First and last mistake, beat the arrogance out of him

Don't fear the pain inflicted, warming up idle hands
Knowing the worst is later, solace for the moment
Wrapped in the shame of cowardice, no end is undeserved
Time for atonement's past, exposed, frail fool, that's you

Thinking the outcome can be in doubt
First and last mistake, beat the arrogance out of him

No coins for Charon, unable to cross over worlds
Dumped out in the river, found unworthy to pass now
Cannot hide from past shame, experience what you have earned
Take pride in suffering, paying homage to the dead
No ego present, instead accepting to believe
Fate of the damned, no doubt is your destiny