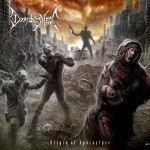 Album rating :  80 / 100
Votes :  1
2. Origin of Apocalypse (2:28)
Track rating :  85 / 100       Votes :  2       [ Rating detail ]
Standing on your podium
Speaking nothing but lies
While the backbone of the nation
Withers away and dies
Origin of Apocalypse
Political corruption for your personal gain
Running the nation like it was just a game
The people never had a defense long ago
You stole our voice
Bullshit policies forced on us we never had a choice
When the curtain falls and our creditors see what we will do
Man made demise falls from the skies
For the debt of this nation we will pay with our lives
Nothing left around but devastation
Results of political rap to our nation
Survival of the fittest, the malevolent will thrive
Killing of the sick and the weak will initialize
In devastation the government fails
We're left alone to fend for ourselves
Left in the streets for food we fight
Tell me now, where your policies right?
You brought us here by lies and deceit
A great nation fails brought to defeat
Origin of Apocalypse
By forced they take this nation
Four years terms of devastation
No more will this country rise
The great American Dream withers and dies