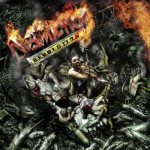 Album rating :  78.6 / 100
Votes :  8
7. T.he Violation of Morality (4:36)
I've lost faith - counting the days
Meaning of life - stabbed with a knife
I gave up on trust and amities
My hearts is about to fucking freeze
I've been treated like dirt
Friendship is just an empty word

A put-up affair - so hard to bear
Like a loaded dice - in the game of life
Kinship was the only key, my survival strategy
the act of desecration killed the person
That once was strong - willed