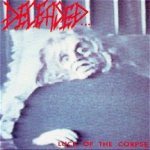 Album rating :  84 / 100
Votes :  5
9. Feasting on Skulls (3:39)
Track rating :  80 / 100       Votes :  2       [ Rating detail ]
Dismal source of energy scarce the food for life
Empty is an empty world contaminated sights
Collecting corpses all around building up their stock
A morbid menu for mankind distastes distorts to shock
Just how long will it last how much can they take?
Eating carcass as a meal in a frenzied state
Feasting!!
Corpses gather many round piles of bones and flesh
Take the protein from the skulls of all those laid to rest
Feasting, on skulls!! Feasting!!
Starvation tearing at their guts eat the gore or die
The awful taste stomaches turn "it's wrong" a mutant cries
But is it worth it is it right?
Feasting on the skulls cadavers feel the pains of death
Now eat until you're full.....
Starvation
Skulls our food
We live on
Feasting, on skulls!! Feasting!!
Feasting on skulls!!

Luck of the Corpse - Lyrics