The Witch-Hunts Trilogy Part I: The Preacher Came To Town Lyrics 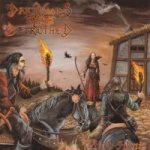 A peaceful town down by the lake
A cradle of goodness and righteousness it was said
Quite prosperous one might add
Rye fields, cattle, and the riches of the lake
Fallacious was their dormancy of shelter
Blindfolded had they themselves with the shadow of the cross

This dormancy lasted until a dusk in August
A preacher came, handsome enough to wet any lady
He was greeted with warmth and friendliness
Though a bit of jealousy showed on the looks of the men

It began to show at the end of the month
The crop and the cattle dead, ground frozen, famine awaited