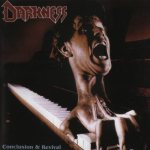 Album rating :  85 / 100
Votes :  1
6. Burial (4:21)
Eighty-seven as the story began
Some musicians folled their leader's command
Their mistake was that they signed a contract
Their debts grew as the record was out

They believed that everything would work so well
No objection frightened them
Their ears were deaf, their eyes were blind
Ain't no caution changed their mind

So their members and time passes by
Many faces, different guys
Just a few gigs from time to time
No big deal, but a programmed decline