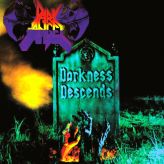 Sacrosanct, the religious ones
Are fast becoming extinct
Chaotic precursors of what will befall
Permeate the night air
The fear of the end preys on the minds
Of all the soon-to-be dead
With death at the hands of a hideous fiend
A grisly fate to comprehend

Internal combustion, plutonic rage
The bodies create their own hell
The flame from within, unleashed from its cage
Purging the great sins of all
Admissions of guilt are all that are sought
By judges who have twisted laws
The quick abrogation of the populace
Striking with great enmity

Listing the ways in which we will die
As the prophets claim we will soon
Self-immolation that unjustified
Stygian shores ahead loom
The coffins are ready, the death warrant signed
Depression has swiftly set in
Inimical powers against humankind
This charnelhouse ensanguined

Decaying, the ruins fall swift to the ground
The carnage is morbid and great
Mephitic deathstench of corpses abound
The earth meets an untimely fate
The horrific malignancy, spreading its wings
Across the expanse of the sky
Contamination and all that it brings
The judges commit genocide

Retaliation, a useless ploy
We've gazed into the face of fear
We know that it stands for our own bitter end
The end we realize is now here
The claws of denouement grasp at our lungs
Asphyxiation rules supreme
The future of mankind cut down while they're young
Our children die clutching their dreams...