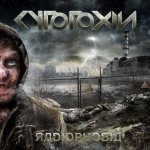 Album rating :  91.3 / 100
Votes :  4
7. Heirs Of Downfall (4:38)
I dwell in ruins of the former over-the-horizon-radar
Antennas rust slowly, squeak in the wind
Thousands tons of metal - high alloy steel
150 meters - zinc layer prevent it from corroding
Epic construction - retreat of the damned - a place of rest
My mind accept what the eyes won't believe
Rise - over the forest
Rise - to the sky

Study an updated map where are the erased places marked
And the concrete slab roads are surrounded by thick pine
forest
Power plant is shimmering in the distance behind the trees
Half-destroyed houses, abandoned villages appear on the
horizon

I force myself to sleep among the mouldered crossgraves
The singing of the dead brings me to rest
No grave wreaths, no plastic flowers
Only the yellow-black triangular radiation signs

Prypjat
Cargo port, crane cemetry
I pick one of the cabins
Surmount the endless
Leader to reach a hight
With less radiaton