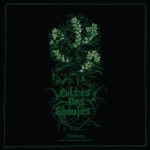 In a place wild and dreary, flashing of the blade
Naked we tread Thy round, the oath is made
Altar's red, the dagger cuts the twig

Working forbidden mysteries and singing words of scourge
Assembled in the light of the blazing torch
Altar's never clean, the dagger cuts the twig

Bat's blood and the tongue of dog
Sting of snake and eyes of frog
Juice of hemlock and silverweed
Opium, mandrake and henbane's seed
Foreskin of birth-killed babe
Hell-broth tastes like Satan's grape
Black cat's wool and lizard scales
How sweetly cauldron exhales