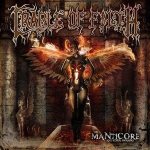 She stalks the shadows, burning
The smoke is thick and reeks of blood
Her hunger an eternal yearning

Tantric, necromantic, a wank fantasy of faith
She religiously feeds a feverous all man-eater

Screaming from the pulpit
Damnation's oratory

She is the bane of mothers
Grand leveller of Maa Kali's Mardi Gras
What man would damn the world to summon her?

Be still
Pray silence lest she stoops to conquer

Razor backed, she attacks
Empire's battle cat
A creature of the white devil's rule
Mythical and mystical
Provinces will recall the swarm
Of refugees from her pall

A lick of fire on her lips
As silent as a will-o'-wisp
She comes amongst you all, tigressive
Blazing in her pride
Hellraising horrors from the dark-side...

The Manticore and Other Horrors - Lyrics