Epidemic of the Era Lyrics 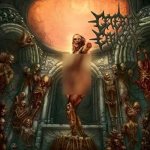 Album rating :  82 / 100
Votes :  5
4. Epidemic of the Era (4:10)
Track rating :  90 / 100       Votes :  1       [ Rating detail ]
It’s the time for the extreme genocide, the real apocalypse,
Evident extending cataclysm. Effective massacre, lethal
Viral infection, created viruses introduced to the rest of
Mankind. The first infected ones in this mass murder
Immediately become gangrenous and they decompose
With intense pains that move to the rest of their organism,
Giving way to thousands and thousands sores, eruptions
And extreme stomach cramps. Many of them even burst
And expel the stomach from their own rectum while
They disintegrate as if they were melting in an acid bath.
Others however, are capable even to stick their
Fingernails on their faces to tear them out with excessive
Violence. Great number of nails with skin pieces can be
Appreciated on the ground, cranial parts still with hair
Remains. Still beating stomachs, blown out hearts,
Deflated lungs and kidneys. Bodies hold organs with
Their pierced and rotten hands. Bodies hold organs with
Screams makes that somebody knows they are alive.
Some satisfied expressions are greateful to a few naives
For allowing. The sickness floats in the air.
The plague produces an efficient result on thousands
Of corrupt savages that will carry a bloody host inserted.