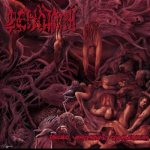 Album rating :  –
Votes :  0
9. Carving Mental Butchery (5:50)
Throbbing pain pulsed around her fuckin head
Hammering at her skull, stabbed into her eyes
Holding a long carving knife in one rotting hand
Blood spurted and then gushed as the blade slit her deep
Cutting, sawing, and slicing
Carving mental butchery, screams in melting eyelids
Hunger carnal butchery awfully burning corpse
Hammering, at her skull, hunger never satisfied
Moaning in ecstasy at the prospect of fresh human meat
Limbs were severed, knee cages left
Several nasty fuckin corpse without even legs to walk
Awful process of burning corpse blow her brain out, back of her brain
Speechless hordes of the body beneath the broken tombstones
I am beyond this life...brutalized looking for the brains to eat...horrified
Attacked by the large creature...vomited
Waiting for the worst, leaving behind gore scenery
Dead nothing can stop that
Her arms were massive stalks with pieces of muscle and tendons exposed
Head had been completely ripped from body
Half chewed head, she was so clearly dead
Dead head, torso had been ripped apart
Entrails hanging out intestines...
Other such organs hanging from the bloody jowls...
The body slumped lifeless despair to inflicted
Graveyard zombie viscera, soulless walking dead, gruesome wet noises of godless sliced remains
Her child...ripped off cunt
Maggots roll out of her eyeballs as I watch on entralled
Her guts held open by surgical clamp
Innards drying off nicely, dead people hanging from ceilings...