The End of Mullah's System Lyrics 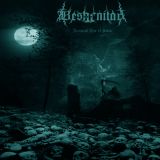 Album rating :  –
Votes :  0
10. The End of Mullah's System (4:54)
Under the mental torment
By the hand of torture and death
Autocracy, the exploitation of the curses
The path of blood, forever with pain
Screams of incarcerated souls
Discrimination, dark tyranny of lords
I've witnessed the blood-stained ropes
Under to laws of Islam
Laying the seeds of tyranny
Under to laws of Islam
Once again, the shades of agony
And finally
The end of mullah's system

The time has come , for you to be torn apart
No escape , but annihilation

The mullah , the hypocrites , religious puppets , the humanoid (2x)
Against the screams of the oppressed

I shall follow my hatred and war
Under the word of justice
With flames, shining black still
War eternal is declared

Around the 13 Sins - Lyrics