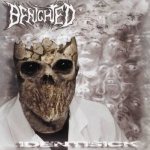 She explains the nightmare as she was pushed in a pit of serpents
Paralysed in the swarming mass, hypnotized by their vicious eyes
Feeling them entering her
The coldness of their skin
The suffocation and the sufferings
Unable to move, praying that all stops
She's imploring Death to welcome her in its kingdom
She asks us for dying

Unable to eat, afraid to let anything penetrate
Surviving against her will, catheters in her arms
Terrorize her, she feels the medicines poison the blood little by little
Wrapped into silence, laconic and motionless

Uttered howling in the night
She always does the same dream and she awakes in sweat and fear
As a mental impalement
Once the serpent has entered, it stays in you forever