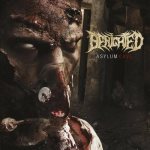 Album rating :  93.3 / 100
Votes :  3
8. A Quiet Day (3:39)
Track rating :  95 / 100       Votes :  1       [ Rating detail ]
Today newspaper says: on last Saturday
Some macabre discovery
Was made in a house of the neighborhood
A corpse was found in cave
Left in an advanced state of decomposition
And children's toys everywhere around him
Neighbors were alerted by the putrid stench
Escaping from the house
The man used to live alone
Polite and discreet on the quiet side of the street
Forensic autopsy: rigor mortis was present
Pupils widely dilated
Epidermolysis process
Pieces of flesh were missing
On several parts of the body, some were found close to him
Soaking in dry spilled blood
Pieces of flesh were missing (no cause or evidence found)
On several parts of the body
Morbid curiosity
Some were found close to him
This was a quiet day... the other missing pieces were extracted from his stomach
The autopsy revealed the man devoured himself
He probably vomited all the meat his organism couldn't endure
No psychiatric history or other element found
Old scars on his body
Revealed he endured bad treatments
Or used to practice self-mutilation