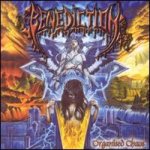 There's no divinity in man, just flesh and blood
When you die you do nothing but rot
The blind path leads onward to extinction
Genetic time bomb detonates armageddon

This graveyard earth, disaster waiting to happen
A brave new world, with no more need for guilt
Freedom at last, break the chains of oppression
No meaning in the end, so do as thou wilt

2000 years of slavery
The time has come, revolution's at hand
A storm of fire, that will ignite the earth
My will's my own, not some god's to command!

So now we reclaim what is rightfully ours
All gods be damned, nothing stands in our path
Liberated, eyes open wide we are
No more a race of fools, we are but flesh for the worms

A war continues in the name of destruction
No quarter ever given, no quarter allowed
Compromise a word with no meaning for us
In the cries of the enemy let justice be found

Fuck you all, you won't make me believe
Your foolish prophecies only good to deceive
I'll kill myself before you make me agree
With a single fucking word you say...