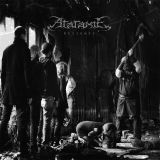 Album rating :  –
Votes :  0
1. People Swarming, Evil Ruling (21:18)
You can’t help beholding that troubling wave in the distance
Even if you’re told that it doesn’t have to be considered
Still, you’ve just embarked a precarious raft that heads towards it
Believing in your lucky star, failure won’t be yours this time

Overfed with disillusions, you were enrolled by a considerate wise man
He talked about another path, these words echoed in your soul
At last a promised land where deception won’t ever be
Lifelong recognition for all, no more profit upon misery

Yet, inside that tiny boat, don’t be surprised if you're not the only one
As men can’t stop preaching, room will soon be scarce

No more silence to take advantage of, they’re all roaring with laughter
Soon pitted against one another, hell is other people

Unbearable heat, human bodies as embers
Enough with their speaking, no need to fill emptiness
Excruciating flesh, just feels like skinning oneself
Suffocating air, painfully able to catch your breath

Grovelling among the mass, nobody really cares about you
You’d rather fear your neighbors as they could easily murder you
Human bodies can be quickly reduced to a pile of bloody meat

Feasting with bitter wine, then slicing human meat
Embracing their worst instincts by preying on the weak
Molesting and torturing to simply thrive on their cruelty
Denuding corpses so as to bribe their frail safeness
Where are the wise men? Here there're only ferocious beasts!
Hell is here! Demons dwell among the mass!

Hopeless race, mankind will be remembered as the worst species
The story has always repeated itself, enough with nice stories