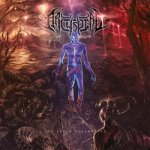 Album rating :  81 / 100
Votes :  5
6. Seven Crowns and the Oblivion Chain (4:50)
In an age of dark and boundless riddle
An artifact of reflective glass was discovered
And brought to a King of eld, encroaching irreversible
decrepitude,
During a laborious search for any and all demented
fruits,
Bearing any unknown wonder or remedy for timely death,
Above or below the broad aberrant land that which he
ruled over.

Then uncertain of its hidden wisdom,
The artifact was unearthed,
And with haste, taken to the kingdom
Where it gained control.

The glass proved to be most abnormal,
Even more so then where it was first found.
For this living mirror was discovered nesting
Deep within the dank dark bowels of an ancient well,
Below an army's worth of old boiling blood.
Entrenched amidst a windy maddening maze of sand
dunes,
In the great blistering dead black desert.

As the king received this treasure from the
netherworld,
Immediately he could sense
The power that it held was not from earth.
Reflecting with imperfection as if it was imitating.
First only what stood before it,
Then whomever it desired.
Yes - it had desire.
It would cast the king with obsessive reprise,
For this was a mimic, not a mirror.
The glass was very much alive.


Becoming of many as each reflection came to life.
The dilated pupil of the mirror started dripping
liquid.
Leeching out from its maternal well was the first
duplication.
Tearing through its keeper,
Fiercely ripping out the retinal membrane.
Born ripe in slime,
Summoned from its slumber with inherent malice for
man.
Cloaked in black embryonic fluid from an ominous
cosmic womb.

Hypnotized in awe and wonder
As one by one, they crossed over.
Replicants from beyond.
Blood lust...
As the deathless ringers arose.

The artifact grew roots,
Planting itself into the castle's centre.
Burrowing its living venom deep into our planet's
core.
Drilling the portal into oblivion.
Birthing spawns from evermore.

Mutations from parallel dimensions,
Then conspired against the King.
When his six reflections had crossed over
Their transfer linked the realms together.
Creating a chain of worlds
That although remain separate,
Share a new born centre.
The centre of this link is the endless pit into
oblivion.
The infinite and non-linear chamber of Kairos.

The King was bound and cast into this pit
By his evil duplicates.
The infinite hells created by his deepest fears,
Torment him endlessly in a moment of frozen time.

Sacrifices to the pit were necessary
To restore the rightful order,
Ending the King's reign.

Seven crowns and the oblivion chain.

We are the six, with you we are seven.
The artifact and the portal make nine.
This revelation of sacred numerology
Is the key to unlock a life without time
When these numbers align then the gates will open.