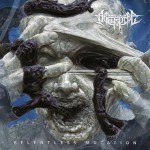 Instructing me of a mission through
A distant telepathic channel
Running directly out from their compound and into my brain
Referring to themselves as the A.U.M.

I was to bring the body back to my quarters
And await instruction
Not an easy task to transport it
Strapping it down to a gurney I dragged it through the alley
Unfortunate casualties noticed me
Using any tools around me at that time to keep them quiet
An iron pipe, a broken bottle
Or a jagged piece of brick or stone

I should not continue to delineate this any longer

With old teeth and leather hands
I took an ear and then an eye
I focused force around their skull
To keep them mute during attempts
To yell for aid, until they fell

A.U.M. made it perfectly clear
I was to bring the body back
Or it would be forced to witness
The drop of black again

I watch through my window as it melts
Fading all the memories I kept
Only A.U.M here
They are conducting human murmuration
From the liquid in his bones
They raise the dead to fly together (x2)

I circle with them in the shroud
The winged ones and I
Falling off their wind, I waken
With unworldly castings burned into my eyes

Each one serving as a needle
To inject in each new body
In this nest A.U.M made it clear
I was to bring more corpses back to life
Or be forced to witness the drop of black again