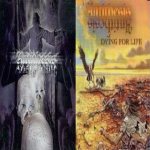 Album rating :  –
Votes :  0
6. Mad Poet (6:21)
The poet sits and twists the meter 'round
And in the glare you'd swear his smile was a frown
And Hermes there, he stares as the pages grow
And all are left to fend for their own

The Titan took a look with leer
As Cronos split the world with a fear
Icarus has flown, he knows he is not alone
As Aries waits with hate upon his fiery throne

Do you now believe it?
There he is, the mad poet
Another page like the one before

The Incubus doesn't know which way to go
The Succubus entices her weary foe
And Hera, in her spiteful way, allows Hades to claim the day

When he looks at what he has done he throws hie feathered quill away
No more wine, no more rowdy songs
The bell tolls to claim its pawn

When does a man begin to live again?
When he is just a step away