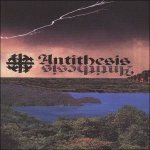 Album rating :  80 / 100
Votes :  1
2. Breeding the Beast (8:50)
God's cruel joke has blown up in our face
Damned from creation, mankind a great mistake
Man had a purpose, obey the laws in stone
But man in his defiance, had made laws of his own

Risen from the clay and dirt
Man was born unto the earth
Master of his destiny, blessed his divinity

The lion licks his chops and sinks his teeth into his prey
The vultures over top strip clean the bones of the remains
So cruel and so savage, the nature of the beast
The nature of mankind, more brutal than the feast

Man is not an animal, too advanced to be evolved
Modern man a breed much worse
Modern man is a monster

Hopeless, it's sad but true, we are hopeless
We had our chance, we turn our backs
Now it's too late. We cannot save ourselves
We can't take back what we've done
We can't bring back what is gone

Hope, pray, somehow, someday
Mankind will change and try to be
More human

God help us all, from grace we will fall
And in our plummet we reveal our many flaws
Man rapes the world in order to progress
Our careless ways will end with our collapse

Try seeing the world through our children's eyes
We leave behind a legacy of lies
Man is a plague, a pestilence that breeds
Bastard offspring inherit wicked deeds

Man is not an animal, too advanced to be evolved
What have we become?
Breeders of beasts