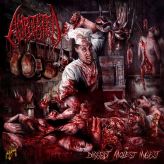 cleanse, the fucking leeches, of their worthless spawn, drugged and abducted, bound, ripped and sawn

clenching the head of the foetus, with my forceps, crushing and twisting as I rip it out of her cunt

gangrene rejected the womb has been infected, twisted and wretched the foetus is decrepit, I smash its head in and rip off all its limbs, sinking my teeth in, i rip out its intestines

cleanse, the filthy bitches, of their legacy, ill show no mercy, to the scrounging whores,

yes there are some who would call me a murderer, but that will not stop me from culling this worthless scourge

blight on a nation, retarded fornication, foul impregnation, grotesque insemination, foregone conclusion, for their fate I have chosen, gutted and broken, their first words never spoken