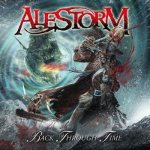 Album rating :  81.3 / 100
Votes :  10
8. Swashbuckled (3:53)
Gather round and listen
As I tell you now this tale
The grim legacy of the pirates three
And how their lives ceased to be
I'll tell you know of Redrum
The ginger commodore
He got a case of scurvy rot
And then that bastard was no more

This is the tale of Captain Crashride
By his crew, condemned and damned
And as if this wasn't bad enough
They replace him with a baldy man
Now his ghost haunts the sea
Eternally he's doomed to wander
Mayhaps you'll hear his deathly cries
C'mon son, buy a Honda!

Back Through Time - Lyrics