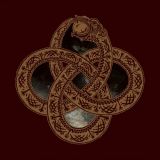 Album rating :  79.4 / 100
Votes :  9
4. Dark Matter Gods (8:38)
Cast away in solitude between the divide of dimensions
Frozen in timeless aura, a catalyst of colors
The abyss...
I was born in the fibers of oblivion; the saturnine keeper of mystery
and malevolent patriarch of chaos

...they fade into the shadows I cast... (evermore in sorrow)

Darkness! Chaos! A malediction! An abomination!!

For each step; nihility, a paradox, an epoch, a quantum crevasse...
Worlds are lost in my path

...they fade into footsteps I leave...

Dark Matter Gods
The dark mass is the father of all

The Serpent & the Sphere - Lyrics