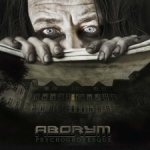 Total isolation
rooms all the same
empty glasses, puke and stains of blood
and the marks of scratches against silent walls
and I can still hear the screams of psychos
and I can still feel the blows
and the stink of medicines
and the screams of silence of endless nights
that neverending darkness
and that blinding white of the walls
dozen and dozen of beings
drag themselves with no sense
there are no mirrors
nobody owns anything
it's like time has forgot to flow
time with no meaning

I heard those voices inside me: you must die... slowly, slowly... where were them?
I could feel them coming to my brain
mysterious nothing... multiproblematic reign
I couldn't contrast them
I tried to run, madly, even by night
I couldn't suffocate them
Those voices were leaking in me
until they took every single corner of my mind
until they became so deafening to feel the urge
of screaming to shut them
the descent to this hell interspersed with attempts of escape
of degradation and violence
long years of horror - the horror of solitude: abandon...
and I banged with my fists to the walls
with hundredfold strength
in here men don't praise the evil
but they buy the good that they find inside of it
in here are swallowed fluorescent poisons and asbestos pills