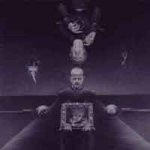 Album rating :  85 / 100
Votes :  1
7. Smirr (4:26)
He sees his world through the crystal state of departure
The hooves echo the approach of the third coming
On it's back a goddess with shining black armour
The steel that will separate the will from doing
Closing in as he falls to his knees, surrounded by
Plasma of dying chapters
Life succumbs to silence, desire alone to the dying
Of inner banes
His hands no longer grasping contraction as he laughs

Winds play their mourners dirge through heaps of corpses
The hooves thundering the arrival of the final coming
Carrying forth the seeds of eternal night
So that the Shadow may sleep, eternity weeps
While we laugh and remain forever

She feels the cold floor giving no comfort as she fades
The hooves echo the approach of the third coming
On it's back the faceless her Elder Ones saw
The agents of microcosmic change shattering the megalith
Stories told, divinity unfold
She passes on, yet remains in Smirr
Cold remains scattered in dead void dreams