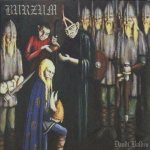 So the Aesir took Baldr body and carried it to the sea. Hringorni was the name of Baldr's ship. It was the biggest of all ships. The Aesir planned to set it out to sea with Baldr aboard for this final journey. But the ship refused to move. So they went to giantland to seek the princess Hyrrokin. When she arrived, riding a wolf and using Vipers as reins she dismounted the steed and Odin summoned four berserks to look after the steed but they were unable to hold without knocking it down. Then Hyrrokin went to the prow of the boat and pushed it out with the first touch so that flames flew from the rollers and all the lands quaked. Then Thor got angry and grasped his hammer and was about to her head until the gods begged for her grace. Then Baldr's body was carried out onto the ship, when his wife Nanna, Nep's daughter saw this she collapsed with grief and died. She was then carried onto the pyre and it was then set alight. Thor then consecrated the pyre with Miollnir, but a certain dwarf named Lit ran in front of his feet. Thor kicked at him with his foot, thrust him into the fire and he was burned.