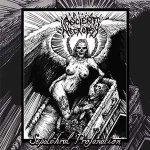 Album rating :  –
Votes :  0
6. Invisible Sin (3:34)
Big and dark secrets, caused by monarch and men dressed with imposing robes, self-proclaimed like prophets sent by god.
Events that traumatized children in their childhood, they were marked for life.
The power of the church was untouchable. So, they secrets couldn't be spoken aloud.
Those are Unquestionable acts, caused by fear, little innocent hidden alone and lost under sites of sacred sculptures.
A cult of catholic priests abusing children covered in tears, no words, they can't speak to society, because the parents was convinced by teachers and preachers to give their children and they will be on right hands.
They will be safe.
Innocent children scream the name of the saints in vain.
Forgive me!
After dirty fuck, they must fake his smile, covered with clean clothes...
Where disclose is unimaginable, where disclose is unimaginable.
They are taken in public and flogged by the executioner, testing torture machines, and they don't know why.
Unchallenged and hidden, mask inside an unreal and imaginary sleep, called Christianity, called Christianity, called Christianity.