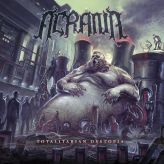 Album rating :  78 / 100
Votes :  5
6. A Gluttonous Abomination (6:23)
Wallowing in a dreamless state, Wake up, you brainwashed, mindless slut. We scheme to awaken your mind. We scheme to cut you, bitch! We'll slice at your warped view of existence, and remove the ignorance buried deep behind those dormant eyes, as we surgically sift
through the oppression, the bloodshed, and lies! Financial domination, privatized banking systems. Blueh! Spreading disease like greedy fleas draining the blood of society. We're bathing in tyrannical decay. He wakes up to a dull, gray empty room, empty like his soul.
Empty like some coward cunt afraid of getting fucked. He turns to the TV, drooling over a decomposition of his mind, shoveling an artificial mess of pulp down his throat, almost suffocating whilst he is inhaling the filth of massive corporations. We will not be a victim
to your bleak conformity, gagged with eyes sewn shut whilst buttoning a pristine suit. He breaks the television trance only to straighten his tie for he cannot possible be late for his purpose. Sickening, sickening, sickening, as he earns his wages, spreading starvation,
death and disease to fill his own greedy, gluttonous stomach with the lives of thousands. Pushing buttons in the name of worldwide suffering, suffering, suffering. Just to stuff his face with garbage. Buy new clothing, new devices, cowering in material misguided bliss.
He cannot see past this falseness, dancing on a grave of objects. We must forcibly awake him from this trance. Go! We'll just wait outside on the regular until you show your ugly mug, then we'll cut it out: your blackened view of life. Mug, go! He earns his place
supporting financial decay: A grotesque, disgusting, excuse for a human being. Mind numbed through a mandatory repetition of routine. Propaganda pumps like pulp through a machine. His optic lens is scalded, retina processing incorrectly. We'll rip apart your skull and
decalcify. Dirty establishment serving slut. You coward cunt, it's time to wake up you authoritative kneeling whore! Get on your knees! Nothing more than a maggot simply sustaining. A subject of a torturous awakening. Get on your knees! We'll force feed you truth with a
nice smile! Meditative insight as we delve inside. Blood will be your new adversary, strapped to a chair with your eyes forced open. Forced to watch his own manufactured atrocities now. Third eye forced open with Dimethyl crystals ensure he's chained into a meditative
state. Lost in complexity of geometric design, he's finally forced to face himself now. A torturous awakening. A torturous awakening. Eyes forced open with Dimethyl crystals ensure he's chained into a meditative state. Lost in complexity of geometric design. He's finally
forced to face himself now. Let's see your money save you now! Your silently wallowing in realization, choking on gluttony, you gluttonous abomination. Now do you see, finally, that this life consists of more than just you?