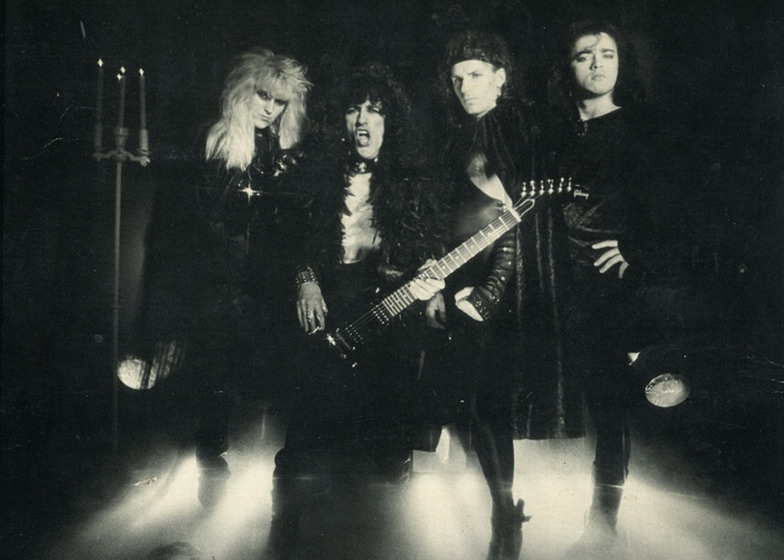 ((CLICK PICS FOR HI-RES SCANS))
________________________________________
Ahh.. Horror Metal! Don't you just love it? Shut up! Of course you do! Dude, it's like this perfect combination of, like, Horror and, ya know... Metal! Even when sung in French with operatic female vocals it never fails to impress me. This ghoulish platter can definitely count itself among the rarest Canadian Metal releases, whose availability is steadily spiraling itself downwards into negative infinity. "Alright, it's scary and expensive, so what. Is it really any good?" you wonder. Hell yeah! Although like many of the other bands of the genre, they're an acquired taste. I've mentioned the rather unconventional vocals. Add to that a rather 'rumbling' rehearsal-room(cave?) production and music which at first listening sprawls out in far too many directions than is comfortable on the MLP-format. The upside with the raw production is that the guitars sound brutal as bloody hell, almost Death Metal-like, but not in a downtuned and muddy sort of way (think mid-80's demo-days DM). This is especially notable in the opening "Richard Coeur de Fer", where the lead riff sound more like some remorseless, bonecrushing, medieval warmachine than any form of musical entity. Combined with the quirky chorus it makes for a great, attention-grabbing opener. "Trop Fort" is the undisputed highlight of the album though. An incredibly intense cut with roaring, powerful, almost dominant leads after leads that doesn't leave you with one second to catch your breath. If you don't love this song, you simply are not Metal. (Sorry if I had to be the one to break it to you): Their rendition of Grieg's "Hall Of The Mountain King" ("Caverne du Roi") is wonderfully pompous and over-dramatic in a way that only an 80's underground Metal band could get away with, and it's a hell of a lot more inventive than SAVATAGE's usage of the same piece, mostly thanx to Ginette's chanting vocals acting like a 4th instrument in this semi-instrumental cut. The end result sound very ritualistic and very, very Horror Metal. I guess here's where they bring out the coffins and resurrect the vampires in their live set. With "Chevalier Blanc" they go all-out instrumental, and in 4 parts no less. There's probably a story behind the titles, most likely inspired from some long-forgotten, foreboding tome. It begins rather odd, in a twangy, VOIVOD-on-surfboards kinda mood. Then comes a drum-solo which is a total waste of time coz 'Peau Rouge' isn't exactly a genious behind the drums. No, strike that. Drum-solos are a waste of time under any circumstances. The proggy parts aren't that exciting either. Conclusion: a filler.

So, it's very all-over-the-place as said, and you're kinda left wondering exactly who the hell these people were and what they were trying to do. Needless to say, a full-length album would have been preferred. Still I find it important to point out that "Resürrection" is a lot more genuinely metallic than I first perceived after reading some other opinions on it in lists and on the web. I was kinda worried it would turn out to be some oddball Goth-crossover affair, but luckily that wasn't the case. TROP FEROSS were all-out, bloodstained, steel-plated METAL - violently original, hauntingly dark and ferociously heavy.