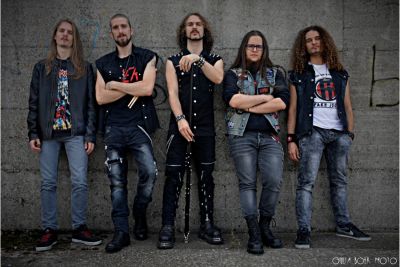 Scyther is a five-piece, featuring Elia Salvel - vocals , Samuele Salvel - bass , Giovanni de Fazio - guitars, Michele "Mich" Camerotto - guitars , Riccardo "Fanti" Fantinel - drums , was formed in Italy in 2013 and have their roots in traditional Heavy Metal and Thrash Metal.
2018 was a significant year for the band, has seen a worldwide record deal announced with DeFox Records, they won important prize as the RockItaly Award and the Accademia Music Awards .
Scyther will be taking ‘Blinded’ on tour this summer, hitting the stages of some of the important independent italian festivals.

The digital album track list:
1 – Chain Reaction
2 – Discrimination
3 – Where Is Justice
4 – Remember Who You Are
5 – Path to the Sky
6 – Dreams of Power and Glory