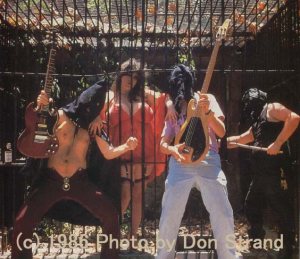 Additional notes
They started in Seattle, Washington (May 1976) in high school as a few friends jamming out. When they moved down the coast to Hollywood, California is when things started to move. With the release of their Trashbag EP / Get Up and Die and the Live at the Whiskey (Cathey de Grande) the precedent was set for the later works which were to come. When the albums You Axed for It and Up the Dose came out they began to get nation wide publicity due to the fact that: according to the PMRC these were the worst of the worst, actually having such lyrics as those to Golden Shower read aloud to a senate committee by Tipper Gore. The tours which followed, and all the other albums have truly made these men cult figures.

The band split-up after El Duce's death but later reunited, with a renewed line up.

Dr. Heathen has a side project with members of Pungent Stench.

Allegedly, Scott "Wino" Weinrich anonymously played bass for the band for a short while in 1986 when he relocated to California to play with Saint Vitus.