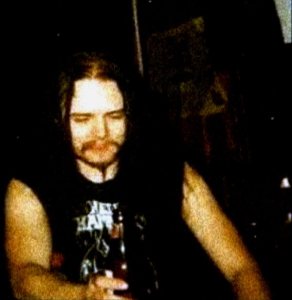 Euronymous Photos (1)
Additional notes
Øystein Aarseth, who went by the pseudonym Euronymous, was a Norwegian guitarist and co-founder of the Norwegian black metal band Mayhem.

Aarseth formed the original Mayhem line up in 1984. At the time he was going by the stage name "Destructor" but on joining the band he changed his name to Euronymous, derived from the Greek mythological spirit (daemon) of the underworld Eurynomos.

Aarseth was a practitioner of Theistic Satanism and admittedly held a disdain for individualism. He stated that Satanism came from religious Christianity, hence he was a religious person. His views were a deliberate fundamental inversion of Roman Catholic dogma. However, Varg Vikernes claimed that Aarseth was not a real Satanist.

He was also owner of the record shop Helvete, Norwegian for "Hell". The store became a major gathering place for many black metal bands and members of the scene. Euronymous was the major figurehead of the group, and founded a group for the "elite" black metal followers/band members to be involved in, calling themselves "The Inner Circle". Some members would preach to each other on destroying and defiling churches, graveyards, and anything of Christian belief. Euronymous firmly expressed his hope that black metal would incite young people to violence, torture, murder, and pain. According to some people/rumors he's also responsible for turning a few Norwegian death metal bands into black metal such as Darkthrone of ''Soulside Journey'' evolving within a year to black metal, Thou Shalt Suffer later ''becoming'' Emperor, Amputation/Old Funeral's members expanding and becoming Immortal, Burzum and Hades. Satyricon also started as death metal.

He also owned an underground label called Deathlike Silence Productions after a Sodom song. He released albums from such bands as Merciless, Burzum, Enslaved, Sigh and Abruptum.

On August 10th, 1993, Varg Vikernes murdered Euronymous in his apartment with Snorre W. Ruch acting as an accomplice. Their relationship before the murder was tense, as their friendship and musical relationship started going downhill. Vikernes, who had started to play bass in Mayhem, killed him due to a number of alleged reasons: over a girl, jealousy of Euronymous's position in the Inner Circle, Euronymous owing him money, Euronymous not releasing Burzum's albums on time. Euronymous was found in his underwear, with stab wounds inflicted with a knife.

He opened an independent record store in Oslo called Helvete in 1991.