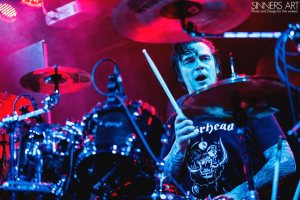 Additional notes
Erlandsson was born in Malmö, Sweden to a Romanian father and Swedish mother. He's the older brother of Daniel Erlandsson. They both grew up together in Sweden and started playing drums at a very young age but with Adrian's career beginning in 1981 at the age of 11 after getting his first drum kit, and started to play with friends began playing covers of classic rock songs. He got his brother into drumming as Daniel admits "If it wasn't for him I probably wouldn't be playing today". They also started playing with their music teacher at school, and eventually began to write their own songs and formed a band.

Inspired by Judas Priest, he formed the Black Nuns which evolved into Berits Polisonger playing until 1986. There then followed a series of other bands including Thrash Metal band Penance in 1987. Erlandsson went on to form Penance, a thrash metal band, which never recorded a demo, although they did record some rehearsal tracks.
Contributors to this artist