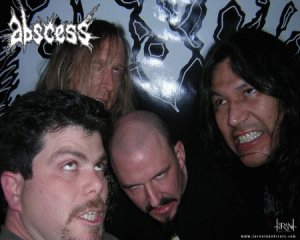 Additional notes
In June 2010, Abscess announced that "Clint Bower has left the band for personal reasons and out of respect to him and to all who have supported us for these 16 years, we have decided to call it a day."

According to the discography on the official site, there also exists an Abscess tape called "Live on KZSU 1994"(which is a different recording to that found on the "Filthy Fucking Freaks" tape from 1995). This tape was released after the "Raw Sick and Brutal Noize" demo and is also known as "Pustulation of Embrionic Flesh (Live on KZSU October 1994)".

EatMyFuk is a punk/sleaze side project in the vein of G.G. Allin & The Mentors featuring all of the Abscess members under pseudonyms. (The avid collector should note that the album CD was released on different labels for the US and Europe. Also, Displeased Records released it on vinyl limited to 500 copies.)

Mirror Snake is an experimental/psychedelic rock side project featuring all of the Abscess members as well as two female vocalists.

Chris Reifert, furthermore, has guested for several other bands: He did live session for Desecration and guested on releases by Murder Squad, Machetazo, Immortal Fate and Nuclear Death. Danny Coralles guested on the latest Aura Noir album. He's done various cover art and also did the logo for Machetazo.
Contributors to this artist