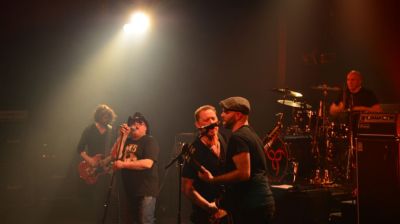 Additional notes
Quite likely the very first Norwegian black metal band ever, 666 (pronounced "sax-sax-sax") predated even Mayhem by a couple of years. The band was formed in North Norwegian capital Tromsø early 1982. Initial members were Krogseth and Nilsen who had left punk-turned-funk (the very reason they left) band Norgez Bank. They recruited Helberg and Seppelæ and debuted live in June the same year. Hermansen joined late the same year, taking over vocal duties.

Naming Venom and Motörhead as prime influences, their music stayed loyal to that hybrid sound. Their stage show, however, was certainly black metal through and through, complete with pyro, buckets of blood and a huge wooden upside-down cross centre-stage.

The band preferred the stage to the studio. Working their local live circuit hard, their probably most seminal performance was at the Festspillene Festival in Harstad (considered North Norway's premium cultural event) where 666 was billed as the Rock/Metal 'alibi' of the festival in 1983. By this time, Helberg had been replaced by Smith-Meyer (another ex-Norgez Bank member). Little is known of the band after this date, only adding to the band's mystery.

Although perhaps not as legendary as Mayhem, 666's status is one of mythical proportions, even in Norwegian Metal circles, due to the lack of recorded output. This, however, was finally rectified by the release of three live CD's produced by the band's manager Dag-Erik Salsten and his No Noise Reduction label during the years 1998 to 2003. The third installment even saw a release party in London.

No Noise Reduction Records is the name of the label set up by Salsten to release the three live 666 CD's, as well as a Norgez Bank compilation. All releases were pressed in very limited quantities, typically 200 each. The label has also released a DVD by Salsten's son's band, Deathhammer, sibling band of Warfield, the latter band actually covered the 666 title track on their demo.

In 2012 the band was asked to perform a concert for the local CultureHouse alongside other old Tromsø Rock bands. The band hereby reformed, albeit with a new line-up (guitarists Håvard Stangnes and Harald Amundsen). Following the concert, the band members decided to keep the band running, both live and in the studio.