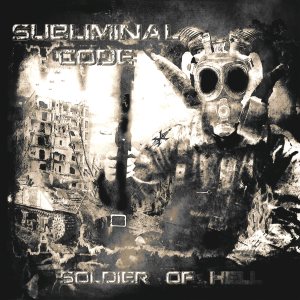 Mastered by Sander Kapper (Stahlnebel & Black Selket), this album is sure to please fans of harsh ebm!

The album will be released digitally in early December with physical copies coming later in the month. ... See More

serenecapitol   98/100
Date :  Apr 4, 2012
These days it’s not easy to stand out in the bleak world of dark electro and harsh ebm. Truth is most acts have a similiar sound. Whether they are imitating another or trying to tread personal new ground. From the very first moment of Subliminal Code‘s Soldier Of Hell, it was clear that the promise of a new tyrant was born. The EP released late 2011 has a strong blend of beats, vile lyrics and imminent darkness which will make those unknown to this genre shudder and run.
Take Lost In the Loneliness, which has the same characteristics of a predator; First it simply shows its face, then the beats drop followed by the synths which ready it to strike. When the lyrics start, it feels like the song leaps and ravages through the flesh and bone structure. Making it a violent track, worthy of the dark electro tag.
However Subliminal Code do show another side with Electro Suicide. This is the most club friendly of their repertoire. As it has repetitive lyrics and a high pace. However taking the heavy sound out, makes the biggest impact or it would have sounded familiar to the other tracks.
The Soldier of Hell EP features some excellent remixes by the likes of Traumatize, who give Lost In the Loneliness a new dimension by slowing it down. And Detuned Destruction, who rework Electro Suicide in such a creepy fashion you may believe in the end of the world.
Subliminal Code are not doing somehting new, however they do deliver a taste of evil we had lost since Psyclon Nine’s hiatus. At the moment the Venuzuelans are working on their first album. Here’s hoping it will be a strong suit. ... See More